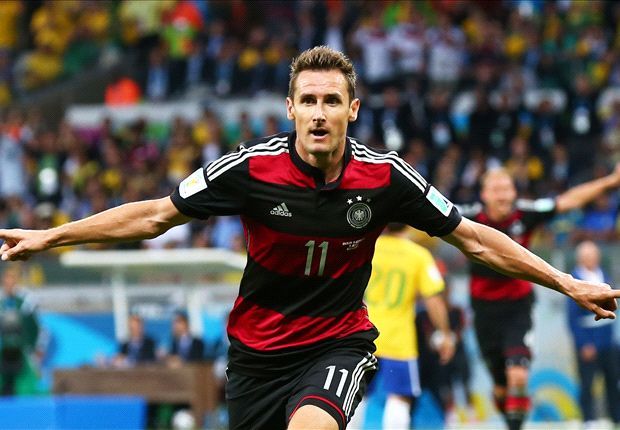 The 36-year-old has written a new piece of football history after surpassing the Brazil legend’s tally of 15 World Cup goals.

Miroslav Klose has become the top goalscorer in World Cup history after scoring in Germany’s semi-final against Brazil on Tuesday.

The 36-year-old struck in the first half against the host nation, tapping home from point-blank range after Julio Cesar had denied him at the first attempt.

Since his last World Cup in 2006, Ronaldo’s record tally of 15 goals in the competition had remained untouched, but Klose has now surpassed that tally at last in his fourth tournament.

Ronaldo amassed his strikes across three tournaments, in 1998, 2002 and 2006 – and lifted the famous trophy once along the way, 12 years ago this summer.

Klose, 36, started the tournament level on goals with compatriot, Gerd Muller, who starred in the 1970 and 1974 tournaments and boasts an incredible ratio of 1.08 goals per World Cup games.

Klose, who was born in Poland, made his Germany debut as a substitute on March 24, 2011 and marked the occasion with a goal.

He struck again against Greece just four days later – despite being afforded just 33 minutes over the course of his first two international outings – and the goals just never stopped coming, particularly in major tournaments.